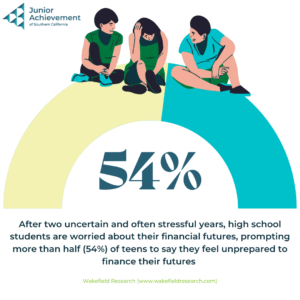 After two uncertain and often stressful years, high school students are worried about their financial futures, prompting more than half (54%) of teens to say they feel unprepared to finance their futures according to our (Junior Achievement’s) new research with Citizens. The findings of the JA Teens & Personal Finance Survey indicate wide-ranging concern among teens regarding financial anxiety and the future, highlighting the need for additional resources to assist them in making financial decisions that impact them over the long term. 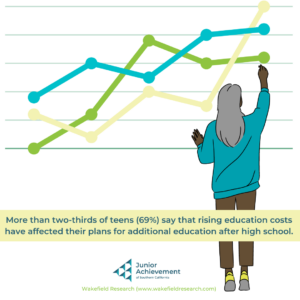 More than two-thirds of teens (69%) say that rising education costs have affected their plans for additional education after high school. While nearly a third of teens (31%) don’t expect their plans to be impacted, almost as many (28%) say they are now only considering in-state schools, while around a fifth (22%) plan to live at home and commute to college, and one-in-ten (10%) are considering getting a two-year degree versus a four-year degree. Wakefield Research conducted the survey of 1,000 teens between the ages of 13 and 18 between February 18 and 24, 2022. 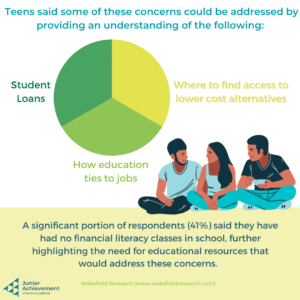 Teens said some of these concerns could be addressed with a better understanding of how student loans work (39%), knowing how education ties to jobs (38%), or having access to lower-cost alternatives (32%). A significant portion of respondents (41%) said they have had no financial literacy classes in school, further highlighting the need for educational resources that would address these concerns.

“Based on these survey results, it appears that teens are becoming more aware of the costs associated with higher education and are being more selective in the way they pursue that education,” said our JASoCal President & CEO, Dr. Les McCabe. “This may be the beginning of a positive trend, but it’s essential that teens have the information they need to make informed choices about higher education. That’s why Junior Achievement works with partners like Citizens to provide this type of information through our learning experiences for middle and high school students.” 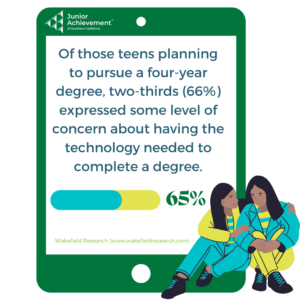 The digital divide became even more apparent at the outset of the pandemic, exacerbating digital literacy and technology equipment gaps. Of those teens planning to pursue a four-year degree, two-thirds (66%) expressed some level of concern about having the technology needed to complete a degree. Factors that contribute to this concern include the cost of devices (52%) and poor Wi-Fi access/connectivity (28%). This lack of access becomes an inhibitor to young people to learn, work and even go to college. 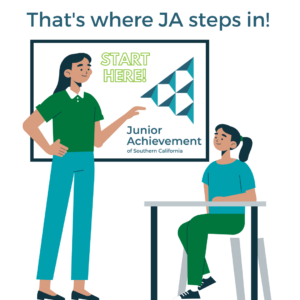 Like Citizens, us at Junior Achievement have prioritized this issue in our community outreach work and remain committed to supporting underserved communities through technology, education, and digital literacy initiatives to ensure that all have an opportunity to be part of the workforce of the future. Citizens’ commitment to financial literacy has included partnering with us at Junior Achievement to support the implementation of financial literacy programs in communities where Citizens has a presence. Citizens also helped us to enhance different implementation models, such as virtual volunteering and remote learning, in response to the COVID-19 pandemic.

Additional findings from the survey include:

The Junior Achievement Fintech Survey was conducted by Wakefield Research (www.wakefieldresearch.com) among 1,000 nationally representative US Teens ages 13-18, between February 18th and February 24th, 2022, using an email invitation and an online survey. Data was weighted to ensure a reliable and accurate representation of U.S. teens ages 13-18.

Results of any sample are subject to sampling variation. The magnitude of the variation is measurable and is affected by the number of interviews and the level of the percentages expressing the results. For the interviews conducted in this particular study, the chances are 95 in 100 that a survey result does not vary, plus or minus, by more than 3.1 percentage points from the result that would be obtained if interviews had been conducted with all persons in the universe represented by the sample.